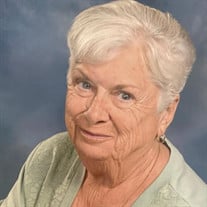 Bettylou Evans, age 79, of North Carolina, and formerly of Laurel, passed away on March 15, 2022 at Transitions Hospice in Raleigh, North Carolina. Born in Milford, she is the daughter of the late John and Mildred Millman. She proudly served her country in the United States Navy. Bettylou was retired from Vlasic Food and the Campbell Soup Company as their payroll clerk. She loved the American Legion and the Los Angles Rams. She was the State Commander for the American Legion in the early 90's, President of the Ladies Auxiliary for the State of Delaware. She was the only lady in Delaware history to hold both positions in the state. Bettylou wrote the National American Legion Newspaper for nearly 15 years, and had lunch with Joe Biden on many different occasions at the American Legion. Mr. Biden spoke at her husband Master Sergeant Maurice Evans (Moe) event. She loved going to the beach and laying out in the sun, going to the casinos in Atlantic City, eating crabs at the Old Mill, going to the Godiva plant around Christmas time to get gifts, volunteering at Nanticoke Memorial Hospital, and traveling and meeting people from all over the world. Some of the families greatest memories where of her camping and crabbing, and going to the superbowl parties at the legion. She loved coaching her sons little league teams and being the official score keeper while her son was playing. She is survived by her sons; John Fabor, and Ronald Fabor; her grandchildren, Daniel Tierno, and Jeffrey Tierno. In addition to her parents, she is preceded in death by her husband, Maurice Evans, and her brother, Norris Millman. A viewing will be held on Friday, March 25, 2022 from 12pm-1pm at the Hannigan, Short, Disharoon Funeral Home, 700 West Street, Laurel, DE 19956. A funeral service will be held at 1pm at the funeral home. Pastor Joe LeCates will officiate. Interment with military honors will follow in Odd Fellows Cemetery in Laurel. In lieu of flowers, contributions may be made in Mrs. Evan's honor to Transition's Hospice House, 250 Hospice Circle, Raleigh, North Carolina 27607. Arrangements are in the care of the Hannigan, Short, Disharoon Funeral Home in Laurel, Delaware.

Bettylou Evans, age 79, of North Carolina, and formerly of Laurel, passed away on March 15, 2022 at Transitions Hospice in Raleigh, North Carolina. Born in Milford, she is the daughter of the late John and Mildred Millman. She proudly served... View Obituary & Service Information

The family of Bettylou Evans created this Life Tributes page to make it easy to share your memories.

Bettylou Evans, age 79, of North Carolina, and formerly of Laurel,...

Send flowers to the Evans family.