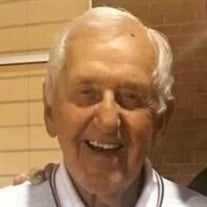 Alexander John Balazik, Jr., 99, of Laurel passed away on Thursday, February 3, 2022 at the home of his daughter in the presence of his daughter – Barbara B. Bigler, his son – Lex Balazik, III and daughter-in-law Martha Witt Balazik.Born on June 14, 1922 in Dunellen, NJ, he was the son of the late Alexander John, Sr. and Otilla Smero Balazik. A 1940 graduate of Dunellen High School, Alex as he was best known, played high school football and basketball. Upon graduation, Alex enlisted in the U.S. Army and was assigned to the 85th Infantry Division and served in Italy during World War II, where he was wounded and received the Purple Heart. After the War, he went to apprentice school to be a machinist. He worked for Wood Industries in Plainfield,NJ for 40 years. On April 12, 1947, he married the love of his life, the former Josephine Ann Gioino. Mrs. Balazik passed away on October 17, 2016. Mr. & Mrs. Balizik were married 69 years and were members of St. John’s Catholic Church. Mr. Balazik had been a resident of Dunellen, NJ for 94 years. Alex enjoyed working in his yard with his wife and spending time with his family. He loved watching sports and playing golf. He is survived by his daughter – Barbara Balazik Bigler of Laurel, DE; a son – Alexander John Balazik III & his wife – Martha Witt Balazik of Suwanee, GA; 3 grandchildren – Rachel Stockard & husband Brian of Vestavia, AL; Brian Balazik & wife Libby of Montgomery, AL; and Rebecca Kurth & husband Darrin of Auburn, AL; and 5 great grandchildren – Brian & Alexandra Stockard and Mackenzie, Jacob & Madison Kurth. A Memorial Mass and military honors will be held in Suwanee, GA at the convenience of the family. Memorial contributions, in Mr. Balazik’s name, may be made to St. Jude Children’s Research Hospital, 501 St. Jude Place, Memphis, TN 38105. The Hannigan, Short, Disharoon Funeral Home 700 West Street, Laurel, DE, 19956 is serving the Balazik Family.

Alexander John Balazik, Jr., 99, of Laurel passed away on Thursday, February 3, 2022 at the home of his daughter in the presence of his daughter &#8211; Barbara B. Bigler, his son &#8211; Lex Balazik, III and daughter-in-law Martha Witt Balazik.Born... View Obituary & Service Information

The family of Alexander John Balazik created this Life Tributes page to make it easy to share your memories.

Alexander John Balazik, Jr., 99, of Laurel passed away on Thursday,...

Send flowers to the Balazik family.