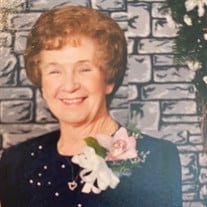 Aileen Frances Jefferson, age 91, passed away on Wednesday, May 4th, 2022 at TidalHealth Nanticoke, Seaford, surrounded by her loving family. Born in Cambridge, Maryland, on October 4, 1930, she was the daughter of the late Russell and Myrtle Todd Parks. Aileen was a 1947 graduate of Cambridge High School and lived in Cambridge until her marriage in June 1954 to Earl Jennings Jefferson, Sr. They made their home together in Laurel until his passing in August of 2020 with Mrs. Jefferson continuing to reside there. Aileen had worked as a secretary for Carmean’s Hatchery and Fowler & Williams Insurance, while becoming the Insurance Market of Laurel. She retired in 1999. In addition to her husband and parents, she was also predeceased by a daughter, Renee A. Northam (Pat), and a sister and two brothers. Aileen is survived by her daughter, Robin Griffith-Lank (Lawrence); her son, Jay Jefferson (Joyce); five grandchildren, Holly Cay (Kenny), Wendy Peterman (Barry), Aaron R. Jefferson (Kelly), Noel A. Jefferson & Jennifer R. Northam; five great grandchildren; sister, Joanne Tall (Buddy); sister-in-law, Pat Creighton (Donald) and several nieces and nephews. Anyone who knew Aileen could see how much she loved her family. She was known for her compassion for others and always had a smile and a kind word for anyone she met. A graveside funeral service will be held in Odd Fellows Cemetery - Laurel at 2:00 pm on Friday, May 13th, 2022. Pastor Garry M. Light will officiate. A viewing will be held from 1:00pm-1:45pm at Hannigan, Short, Disharoon Funeral Home, 700 West Street, Laurel, Delaware 19956. Memorial contributions may be made to Vitas Healthcare, 30265 Commerce Drive, Suite 202, Millsboro, DE 19966.

Aileen Frances Jefferson, age 91, passed away on Wednesday, May 4th, 2022 at TidalHealth Nanticoke, Seaford, surrounded by her loving family. Born in Cambridge, Maryland, on October 4, 1930, she was the daughter of the late Russell and Myrtle... View Obituary & Service Information

The family of Aileen Frances Jefferson created this Life Tributes page to make it easy to share your memories.

Aileen Frances Jefferson, age 91, passed away on Wednesday, May...

Send flowers to the Jefferson family.